There is a lot at stake in the Aereo case.  Oral argument in the United State Supreme Court comes Tuesday, April 22, 2014, with a decision expected before the end of June.

Aereo is among the most significant decisions in the area of technology since the 1984 Betamax decision on VCR technology.  Betamax videocassette recording was long ago eclipsed by VHS, and, in turn, VHS tape recording gave way to other ways to record, store, and play back TV content.  (We discussed here last August that broadcasters may rue the day they challenged Sony’s Betamax).  Betamax was the key decision that allows home users to “time-shift” content:  record it and watch it later.  TiVo and other forms of digital video recording rely on the legal precedent of the Betamax decision.  And Aereo’s arguments today start from the Betamax precedent that allows users to record TV content.

For a monthly fee, Aereo allows individual households to rent a tiny antenna and a DVR/storage space near the location in their area where the free over-the-air TV broadcast can be easily captured.  Each antenna connects to the user’s DVR-like storage. 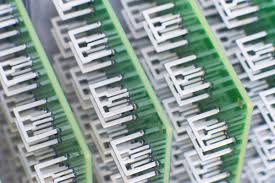 The dime-sized antennas of each household are housed in a compact array at Aereo’s site.   TV shows the user records can then be accessed from Aereo’s servers by the user over the Internet.

Aereo sees its service as no different from renting the consumer an aerial antenna and a DVR box to store the free signal TV broadcasters send to that antenna.  A key difference is that—rather than having to climb up on the roof of your house to capture a potentially fuzzy over-the-air broadcast signal—your miniature antenna from Aereo is across town near the source of a clear broadcast signal.  Rather than running a cable down from the roof, the Internet functions as, essentially, a really, really long cord to the consumer’s phone, tablet, computer, or TV.

Financially, the content providers risk losing $3 billion per year in “retransmission fees” they charge to cable and satellite companies.  Broadcasters have sued Aereo in New York, Boston, and Salt Lake for copyright infringement.  In 2 of the 3 lower court cases, the broadcasters have lost against Aereo.   The ruling in New York–for Aereo and against finding copyright infringement–was affirmed by a decision by the Second Circuit Court of Appeals.

Recently, the federal district court in Utah ruled in favor of those challenging Aereo and enjoined Aereo.  The 10th Circuit Court of Appeals denied a stay of that injunction.  Pending the US Supreme Court’s ruling, Aereo stopped providing its service in Salt Lake City and Denver (both in the 10th Circuit).

Legal Issue Under “Transmit Clause” in the Copyright Act of 1976

The litigation by the broadcasters asserts that Aereo infringes the content providers’ public performance right under The Copyright Act of 1976.  That Act includes a cryptic right under the Transmit Clause (17 U.S.C. § 101) to

(Emphasis added.) The broadcasters argue that Aereo is publicly performing their copyrighted work under the Transmit Clause without a license.

Aereo’s response is, essentially, that because each subscriber household has its own antenna (however small) and own DVR space on which to store the subscriber’s recorded content, Aereo is not re-broadcasting the signal to the public when it allows users to access their own lawfully acquired content over the Internet.  Aereo contends that is simply a private playing of the user’s own content.  In the words of the Transmit Clause, there is no performance to “members of the public capable of receiving the performance or display.”  The Second Circuit said when it ruled in favor of Aereo that

It was key for the Second Circuit that each Aereo user has her own, distinct antenna and ability to store content in DVR-like space on Aereo’s servers and, therefore, there was no public performance of that work when the user accessed her separately recorded and stored copy of a TV program.

Dissenting Second Circuit Judge Chin dismissed Aereo’s service employing “thousands of dime-sized antennas” as a “sham . . . . a Rube Goldberg-like contrivance, overengineered in an attempt to avoid the reach of the Copyright Act and to take advantage of a perceived loophole in the law.”  On February 19, 2014, Utah Federal District Court Judge Dale Kimball essentially agreed with Judge Chin and ruled that Aereo’s service is “indistinguishable from a cable company”.

In the Second Circuit’s ruling, there is one sentence saying “Nor is Aereo alone in designing its system [to take advantage of what Justice Chin’s labels a” perceived loophole”], as many cloud computing services, such as internet music lockers, discussed further below, appear to have done the same.”  If one accepts Judge Kimball’s analysis of the Transmit Clause in the Utah decision against Aereo, the business position of the many cloud service providers gets cloudier.  It is hard to see how this Supreme Court can draw a line that says that Aereo’s transmission over the Internet to its customers constitutes an infringing “device or process” without pulling the Internet transmissions by Dropbox, Box.com, GoogleDrive, OneDrive, etc. of their respective customers’ stored files into the vortex of the jumbled wording of the Transmit Clause.

The broadcasters’ case against Aereo attacks a key legal principle under which [cloud storage] services operate: if a user employs an online service to stream their own, lawfully acquired content to themselves from a remote location, this is a private performance that does not infringe copyright. Broadcasters, however, insist that “any device or process” that transmits works to the public makes a public performance, each of which must be licensed.  Because cloud services are a “device or process,” this calls into doubt cloud providers’ ability to give users remote access to their own content without securing licenses for every file in the cloud.

The broadcasters may have more options.  News Corp. has threatened to pull its free broadcast of Fox channels, such as FX, if Aereo wins.  Fox channels would then be available only on cable and satellite.  CBS has also threatened to stop the free broadcast of its content if Aereo wins and go OTT—over the top—in an Internet-only distribution network outside of paid TV subscription.  Those would be bold responses to an Aereo victory.  As of July 2013, estimates were that the share of US households with cable TV had shrunk to 83%,  and fully 7% of US households relied solely on antennas and the free broadcast signal to obtain network TV content.

These repeated threats by broadcasters to yank the free broadcast signal seem quite hollow.  The networks would then have to explain to their advertisers that their viewing audiences have been reduced by approximately 7%.  A core principle of television advertising since the 1950s has been paying lower ad rates for smaller audiences.

Just as the broadcasters’ litigation against Betamax 30 years ago ended in a crisp ruling allowing time-shifting, the outcome of the Aereo litigation may be a crisp ruling from the Supreme Court that the Aereo-model does not infringe the public performance right in the Transmit Clause.  Some cable and satellite companies appear to have at least considered forming their own Aereo-like service to stop paying broadcasters some $3 billion per year in retransmission fees.  That threat may force broadcasters to renegotiate down the amount of those fees.  That may explain why the broadcasters are fighting Aereo so vigorously.